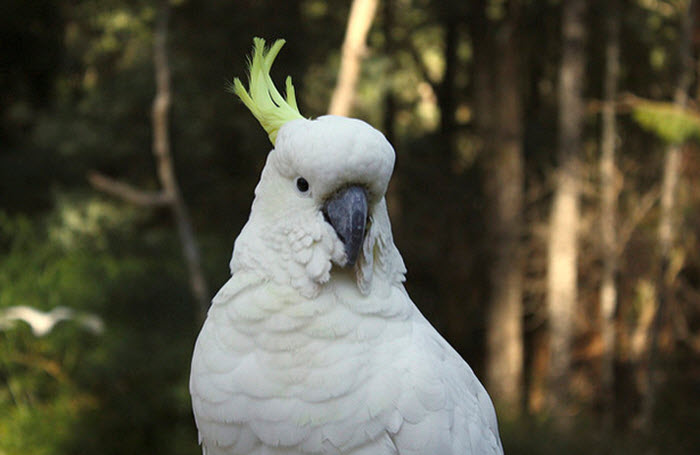 White Cockatoos are one of the 23 species of parrots that belong to the bird family Cacatuidae. This family of birds has approximately 45 different sub-species. They are part of the order of Psittaciformes or parrots.

Most live in trees in forested areas. Many have suffered due to the destruction of their landscape and food sources. When this happens they often move to agricultural areas where they are considered pests by farmers. Many cockatoos are now considered an endangered species.

Cockatoos are known for the feathered crest on their head. They can raise or flatten this crest and will often raise it when agitated or aroused.

They are usually white or gray in color though a few species are black. On their tail or crest they sometimes have a small area of yellow or red. They do not have the bright plumage of other parrots. 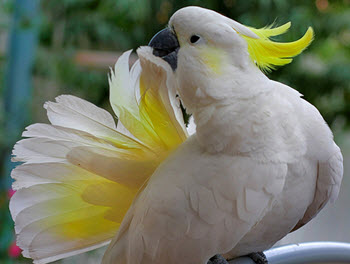 Most cockatoos are large in size. They range from 12 to 24 inches in length and weigh up to 2.5 pounds. The exception is the cockatiel which is a smaller sub-species. A cockatiel is rarely longer than 12 inches and weighs around 3 ounces.

The cockatoo’s bills are curved and very powerful. They keep their bills sharp by scraping the mandibles together when resting. They also chew on wood to sharpen their beaks. Though this is fine in the wild, in urban areas they sometimes chew on buildings, patio furniture, wires and satellite dishes thus becoming pests to homeowners.

Cockatoos use their large, agile tongues to crack open seeds.

When the tips of their feathers disintegrate it produces a fine, white powder which they use to groom themselves. This is why when cockatoos shake themselves you’ll see a mist of fine powder. They also take oil from their back and spread it on their wings. Along with grooming themselves, they will also groom other birds in their flock.

Their molting is a slow process taking anywhere from six months to two years depending on the species.

When sleeping the Cockatoo will usually turn its head around and place it under its plumage.

Male and female usually look similar so it’s often hard to know the sex of a pet cockatoo. In a few species the eye color is different. The female has a red or pink iris while the male’s is always dark brown or black.

The cockatoo has a zygodactyly type claw. This means the outer two toes are backward and the inner two toes face forward.

Cockatoos are social birds and usually live in flocks. Flocks may be as small as 100 birds when food is plentiful but often grow to thousands in times of drought.

The call of the cockatoo can be harsh and extremely loud. They use their voice to communicate danger to other birds, to indicate moods of fear or anger, and to recognize each other. When they feel threatened they will sometimes hiss.

Most species feed in trees but a few, such as the galahs and corellas are ground feeders.

In captivity they’re often fed pellets designed to meet many of their dietary needs but additional foods are still suggested for at least 40% of their diet. Many of these pellets are created for specific species of Cockatoos.

Read more about the diet of cockatoos.

A cockatoo enjoys an average life span of fifty to seventy years. This can of course be altered by diet and environment. Some cockatoos are known to have lived significantly longer and they often outlive their owners. 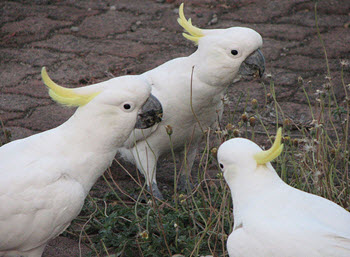 Cockatoos are monogamous breeders who mate for life. They pair up in flocks often up to a year before breeding.

Females are usually three to seven years old before they breed for the first time. Males are even older.

They breed in nests or cavities in trees as do other parrots. They cannot make these holes themselves so they must find hollows that have been created by decaying wood or other animals such as woodpeckers. They often have to compete for these nests with other members of the same flock.

The cockatoo chooses a nest only slightly larger than its own body. They line the nest with sticks and leaves.

Eggs are one to two inches in size. They are oval and usually white. There is no need for a camouflage color since the eggs are hidden in nests in trees. Some species lay only one egg and others have clutch sizes from two to eight eggs. Incubation lasts from twenty to twenty-nine days.

After eggs are hatched, nesting for young birds can last from five to eleven weeks.

Young birds stay with their parents for up to one year.

Large birds such as falcons and eagles are sometimes a threat to cockatoos.

In the nest, eggs are sometimes eaten by lizards who climb the trees and enter the hollows where the eggs are laid. Pythons and rats are also a threat to the eggs.

Too much rain can also be a threat to the young if the nest is flooded.

Humans, trapping the cockatoos to sell, have also been predators.

Cockatoos make popular pets. The cockatiel, the smallest pet cockatoo, is one of the most popular and is often the bird pet owners start with due to its size and friendliness.

It is important to remember that these are exotic animals as opposed to dogs or cats who are fully domesticated. Exotic pets are not always welcomed in apartments, especially ones as noisy as a cockatoo.

While a young white cockatoo may be friendly and enjoy being held; this often changes as the bird grows older.

As with any pet, certain requirements are needed before you should bring the pet home. Too many pet owners discover after the fact that a pet Cockatoo was not the best pet option for their family. The bird is then ignored, mistreated, passed on to another family who are also not prepared or worst of all released into the wild. Make sure you do your due diligence before purchasing any pet.

A few things to consider before you buy a white cockatoo:

Budget: Do you have the money necessary to purchase the bird, pay for a good sized cage, feed the bird quality food, supply toys to keep the bird entertained, and take the bird to an avian veterinarian on an ongoing basis? Unlike some birds, they do not do well on a diet of merely bird seed. You’ll need to spend time and money to supply them with a healthy diet for their species.

Time: Do you have the time to spend training, cleaning up after and enjoying the bird? Cockatoos are social birds and they need attention. Can you deal with bird droppings and damage to your furniture?

Future changes: Do you foresee moving or adding a child to your family in the future? Many birds end up as rescues because a baby was born and the new parents no longer have the time to dedicate to a bird. Cockatoos can live over fifty years so they are not a short term commitment.

Space: Not only do these birds require a large cage, but they need to have some time outside their cage in a safe environment. Usually several hours a day.

Noise: A young white cockatoo may be very quiet but as they grow older they may start to screech – loudly. You’ll need to be prepared for your bird to make extremely loud noises.

Allergies: If anyone in your family has an allergy to feathers than a cockatoo (or any bird) is not a good choice for a pet. Cockatoos have a fine, white powder mist on their feathers that some people are allergic to.

Other pets: A dog or a cat may not take kindly to a bird living in their house and may try to cause the bird harm. An older child may beg for a bird but are they really responsible enough? Also, your child will probably be leaving for college or their own apartment in a few years. Will you be willing to take charge of the bird if they can’t take it with them? Always keep in mind that cockatoos have a long life span.

Children: Small children shouldn’t be allowed around a cockatoo. It can be dangerous to the child and the bird.

To purchase a bird you’ll probably want to visit a specialty store that deals with exotic birds and can explain their needs to you. Another option is breeders. Visit the breeder and see the environment where the birds are kept. A knowledgeable breeder can go a long way in helping you set up a safe environment for your own bird. Keep in mind, though, that they are trying to sell you a bird and therefore might not always be fully truthful about the care and investment needed. Bird rescues are another place to locate cockatoos to adopt.

Some people think they should buy two cockatoos and keep them together.

Ask us a Question

We are happy to try to answer all your cockatoo related questions. Your question along with the answer will be posted on the website as soon as possible. Submit your question here